This guide encompasses over three million square miles of some of the best cruising grounds in the world. From the Andaman Islands in the west, through the Gulf of Thailand and South China Sea and further into the Pacific Ocean in the east. We describe 30 degrees of latitude and 28 degrees of longitude. This entire region lies north and south of the equator in tropical zones. We have included small introductory chapters on the Philippines, Hong Kong and Palau.

This pilot book covers The Andaman Sea, which forms The Eastern Indian Ocean and The South China Sea, connecting via The Malacca Straits, as well as the seas north and south of Indonesia.

Twelve countries are included: Thailand, Myanmar, Malaysia, Singapore, Vietnam, Cambodia, Philippines, Hong Kong (China), Indonesia and India’s Andaman Islands are all covered in some detail. Introductory notes on Palau and the Hermit Islands are included as potential stopovers from the Pacific.

All the information required to pass through or cruise and explore by yacht is presented in an easy-to-reference style. The authors have compiled the information over more than three decades of personal experience in the region and have invited a number of well qualified voyagers to update facilities and opportunities in these rapidly developing cruising destinations.

The best professionals have created detailed, helpful and accurate charts and a logical, easy-to-use, layout style. Combined with quality printing and a rugged, serviceable binding, the result is a volume that is on the bridge of every vessel plying these waters.

This part of Asia is continuing to develop rapidly and more facilities are being built to cater for the growing demands of waterborne visitors. New input is critical to the regular updating of the information within these pages.

The guide will be published every two-three years to ensure that sailors have confidence in the advice given.

The authors welcome comments, which can be e-mailed to: feedback@southeastasiapilot.com

With special thanks to Paul Johnson, Anil Thadani, Morgan Hayes, Ricard Buxo, Captain Mark Holroyd, Captain David Thornburn, Ian Hewett, Captain Ed Shiels and all our past readers who have sent us their valued contributions. 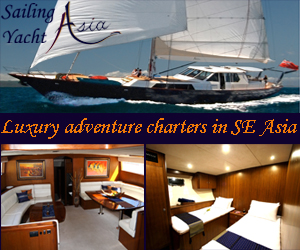