500 miles north of Raja Ampat and sharing a maritime boundary with the Philippines, Indonesia and The Federated States of Micronesia is the breathtaking and independent Republic of Palau, becoming known as Belau. This group of roughly 350 islands, atolls and islets forms the Western Caroline Group of Micronesia. Rising from 5 kilometres depth in the Palau Trench and protected by a barrier reef are the higher islands of Babeldaob, the main island of Koror with Malakal harbour, Peleliu, and the famous Rock Islands.

Just outside the main barrier reef are Anguaur in the south and the atoll Kayangel in the north. With a tiny population of 21,000, the islands run 80 miles south to north and boast the most diverse ecosystems in Micronesia, both above and certainly below the water. The Sonsora volcanic islands and Helen Reef are owned by Palau but are mostly uninhabited and lay various distances south along the route to Indonesia.

Heading to or from any of the Southeast Asia countries described in this guide, and the South Pacific, Palau lagoon must not be missed. It is simply sensational cruising.

Phuket and Palau share the same latitudes so the best weather is during the northeast monsoon season from December to March.

We describe the main port of entry and a couple of interesting spots nearby. If time permits, contacting Sam’s Tours at the Royal Belau Yacht Club is highly recommended. For extended cruising there are dozens of fantastic anchorages and we recommend ‘The Palau Guide’ by Randy and Hideko Abernethy.

Inbound yachts no longer require clearance approvals in advance of arrival. However, it is far better to give notice otherwise you could be waiting longer than you’d like for clearing in. The Royal Belau Yacht Club can offer assistance and information on clearance procedures and will let the authorities know your details and ETA as a courtesy.

Yachts are forbidden to stop at any other island or anchorage prior to officially checking into Malakal harbour. The Palau Port Control monitors VHF Ch.16 and is open from 8am to 4pm on weekdays. The Port Control office telephone number is +68 0775 0419. Entry Permits are issued for 30 days with two extensions of 30 days each possible. US registered vessels get one year.

Fees are levied on all crew for every conceivable permit. You are advised to buy them all to gain legal access to the best activities and destinations Palau has on offer.

At the time of printing, the 70 islands and a few other nature reserves are still completely off limits for any vessel. The harbour master will go over the chart with you personally to make sure you completely understand these boundaries.

Each individual on board is required to purchase a Koror State Rock Island permit for $50 for 10 days and $100 to include a swim in Jellyfish Lake. If you take Jellyfish Lake separately it’s an extra $75.

Whichever way you decide, it’s best to pay the extra and go on one of Sam’s tours to swim in the lake amongst these non-stinging scyphozoa. Unforgettable.

Outside our main Palau chart, and some 340 miles southwest of Koror, is the Helen Reef National Park atoll and lagoon, with a couple of National Park Rangers stationed on the small island. The 10-mile-long lagoon is the internal remains of a submerged volcano rim with a singular desert island covered in trees at the northern tip.

The island is only 3 metres above sea level and surrounded by fringing reef but it’s an incredible bird and turtle sanctuary protected by Palau. There is only one safe passage through the reef into the lagoon mid way down the western edge.

The rangers can assist anchorage in 15 metres on broken coral and sand in the north of the lagoon near their base on the island. Fishing, snorkelling and diving is legendry.

Helen Reef not a port of entry so clearance into or out of Palau cannot be done here, but the National Park rangers really enjoy the company of passing yachts. They monitor VHF channel 16. 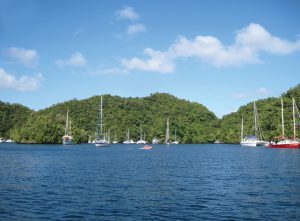 There are three approaches into Malakal port, two from the east and one from the west. Ships and deep draft vessels must use the western approach. Of the two natural channels through the east reefs we recommend the less tricky southern Malakal channel over the Ngel channel further north, which is tighter and shallower.  Read more... 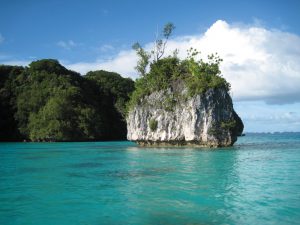 There are three approaches into Malakal port, two from the east and one from the west. Ships and deep draft vessels must use the western approach Read more...