Koh Racha Yai lies 10 miles to the south of Phuket, with Koh Racha Noi a few miles further. The waters between the southern tip of Phuket and Racha Yai are often confused in both seasons, particularly when you have wind against the tide.

In local dialect, these islands are often pronounced, and often written, as ‘Raya’, so don’t be confused. Racha (or Raya) means ‘king’, yai is ‘big’, and noi means ‘small’.

The Racha is a 5-star resort in the northwest bay of Racha Yai, which is the first development of its kind on the island. There are also some budget bungalows and restaurants here, concentrated near the north of the island. Quad bikes are available for rent to explore the many trails and coves.

Day trip longtail and speed boats make the journey to these islands from Phuket, and beach umbrellas are set up in anticipation. Excellent diving, snorkelling, and fishing are to be found all around this group. 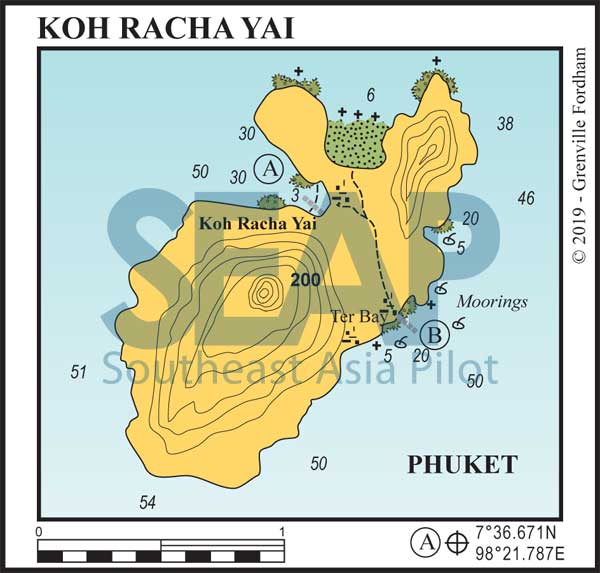 This is one of the real tropical paradises of the area. A fine white sand beach is framed by a bay fringed on both sides with coral. The clear waters are a vivid aquamarine tending to turquoise. Most of the shallower part of the bay now has moorings and the only anchorage opportunity is in 15-25 metres on sand and calcified coral in the outer bay. Sandy patches do exist closer in, but take care to avoid damaging the reef or fouling your anchor.

The Racha Resort has installed a high season floating jetty in the southern corner. You’re welcome to tie your dinghy to the jetty, if you’re eating at the hotel. Tie up close to the beach to avoid hampering the resort’s transfer boats.

The diving and snorkelling are excellent. The beach is frequented every day by dive boats and day trippers so, if you have crew leaving, opportunities for transportation back to Phuket are many.

The evenings are peaceful after the day-trip boats have departed, making this a delightful night anchorage, following a spectacular sunset in this west facing bay. There are several walking tracks to other beaches and across the island. Dive tanks can be filled on the beach.

During the southwest monsoon, the east coast of Koh Racha Yai lends shelter for overnight stops in all but the strongest conditions. There’s a deep water anchorage in 10-20 metres on a broken coral and sandy bottom. A few day dive boat moorings are available but are mostly too shallow for keelboats.

This anchorage also affords access to two small beaches with excellent snorkelling and diving, although sometimes there are strong currents. Ashore, half a kilometre south of the floating jetty at Ter Bay, is the Ban Raya Resort. From the floating jetty a pleasant, easy 20-minute walk takes you through coconut plantations to the north and west beaches. Ter Bay is becoming famous for its wreck diving options.

There are four dive wrecks located off Racha Yai’s Ter Bay on the northeast coast that attract all levels of scuba divers. Furthermost north is the ‘Old Sailboat Wreck’, often mistakenly called the ‘Speedboat Wreck’. It’s in poor condition and sits at 21 metres with lots of snapper and glassfish schooling around it. There are two resident giant morays and the occasional lazy adult Jenkins’ ray hiding under the hull.

The ’Harruby Liveaboard Wreck’ is resting upright in between the two bays with its top at 14 metres and bottom in 22 metres. This is the best wreck in the area for specialty wreck dive courses because it can be penetrated and surveyed. Batfish hang around inside it all the time.

The container cargo ship ‘Sinaran Andaman’ struck rocks off Koh Hei and began taking on water in July 2015. The Coast Guard transported this 65-metre vessel to Racha Yai and laid the entire bow section on the sandy seabed in 24 metres, north of the Harruby Liveaboard.

The bad luck wreck deployment story ‘Marla’s Mystery’ is an old barge purposely sunk approximately 150 metres east of the centre of the two bays; but it ended up lying in 34 metres, too deep for most recreational divers. The attempt was to sink the wreck in shallow water but it drifted away with the current and down to its current depth.

Some highly experienced and mixed-gas divers visit it from time to time, but it’s too deep to be safe for the rest of us. All Racha wrecks are buoyed, and visiting scuba divers on private yachts are welcome. If the mooring is occupied, tie up behind another dive boat and go down the mooring line to the bottom. Always keep a crewmember on the mother boat. A dive levy of 400 baht per person is collected.

This is a good lunch destination from Koh Racha Yai in the northeast monsoon. Look for a deep water anchorage in 10-20 metres close to the small gap in the island; passage through this gap in a dinghy should only be attempted at high tide.

There is good diving and snorkelling along the shores on a mainly rocky bottom. Bottom fishing and trolling around Racha Noi is good.

This anchorage in 15-20 metres is similar to that off Koh Racha Noi West. It makes a convenient daytime lunch stop during the southwest monsoon.

The swimming, diving and snorkelling are great, with the added attraction of a sandy beach connected to a small rocky islet. Please help keep this gem clean by taking a garbage bag if you visit the beach, as much flotsam and jetsam collect here.